July 23, 2009
*Go here for video that doesn't get cut off on the side. Thanks to the Dug for the link
Post a Comment
Read more

The Bay Area in Pictures 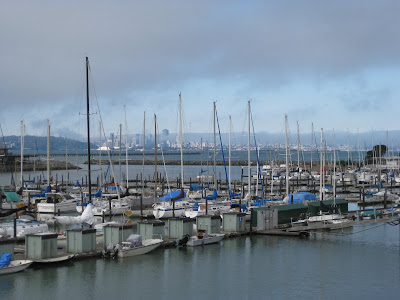 We're back! Here are some pictures of our trip in mostly chronological order: This was our view of San Francisco across the Bay from our hotel room at the Doubletree Marina Hotel in Berkeley. Doug informed me that the clouds were haze, not smog. No, really. Tilden Park Botanical Garden. Having just gotten off the plane from Austin, Ryan and I spent most of the time in awe that it was mid afternoon and we weren't dead from heat. I also managed to get caught in the sprinklers three times. Window Lion at Mr. Mopps Toy Shop in Berkeley, where I purchased a kick ass clock. You should come see it sometime. Fisherman's Wharf. Fisherman's Wharf with Alcatraaaaaaaz! in the background. It was a clear day, but we still couldn't see the Golden Gate bridge. It was pretty much wearing a nice layer of clouds the entire time we were there. We did drive over it on Saturday, though. Waiting for the cable car, being serenaded by a street trumpeter with th
2 comments
Read more
More posts