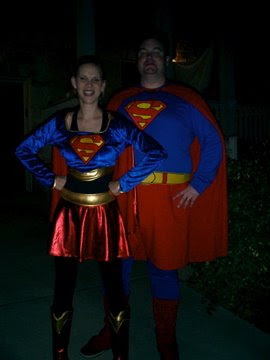 Quotes of the night: Ryan, to pint sized storm trooper : "Hey! Storm trooper!" Storm trooper : "How did you know I was a storm trooper?" Ryan : "How did 'I' know you were a storm trooper???" Tiny Batman, to Ryan : "I'm here to help you save the day, Superman!" We had a great Halloween with tons of kids, beautiful weather, and a surprise visit from Steven and Lauren. Thanks for stopping by, guys! Steven was so enamored with his tri-cornered hat it may make further appearances as his pontificatin' hat.
2 comments
Read more

Austin holds record for most zombies

October 26, 2008
From Thrill the World, Austin : Did you know that we broke TWO world records today? Last year's world record for the largest, simultaneous, (multiple location) world-wide Thriller dance was 1722. Today we almost doubled that number. Today, at the same exact time, 3960 zombies from 9 different countries in 65 different cities participated in Thrill the World (official number still to be verified). Austin contributed just under 25% of that! The other record that we broke is the record for the largest, single location Thriller dance. The record was held by 147 zombies from a middle school in England. We knew we were going to break that record because we had that many people crammed in to our second Thriller workshop! So, we claimed that record for Austin, Texas and SMASHED that record today with 881 zombies dancing on the patio at the Long Center. Plus we did it in style. We didn't use amplified cuing, we didn't have lead dancers on a raised platform, and we didn't play
1 comment
Read more
More posts