Showing posts from 2021
Show all

April 29, 2021
Previously on The Diagnosis: Master List Prologue: For various reasons I've been procrastinating on this post. I'm currently on dialysis and have been for more than fifteen years. The first time around, I did it for a little under two years. It's a much different experience now than when I first started, so I've been having trouble getting into the mindset of those early days. The other issue is that the week of the freeze in February really shook up my perspective. These days, dialysis has become such a part of my life that I don't tend to think about it unless I'm there. I took it for granted, and that was something that came to terrifying light when it just wasn't available. And I didn't know when I'd be able to get it. I never want to go through that again. Dialysis suddenly went from something I had to do to something I actively wanted to do. Which is not how I felt about it in the early days. At all. I started dialysis in September of 1999. Tha
Post a Comment
Read more

It's been a week. I thought instead of dumping this all on facebook or contacting people individually I would catch you up via blog post. If you live in Texas or have heard of Texas, you know what happened and is still happening. Last week, the forecast was predicting a massive snowfall with record low temperatures for Sunday night/Monday morning. But the ice actually started falling the previous Thursday. That made getting to dialysis a little treacherous but I just drove slowly and made it there fine.  Sunday evening I got a call from my clinic saying they would be closed on Monday. Then it started to snow. And snow. At 2am the power went off. The smoke alarm started beeping and driving Scout mad. We made an attempt to go back to sleep. The house was freezing when we woke up. Ryan and I fished out our almost never used long johns and dressed in many layers. I was thankful we possess a plethora of blankets. We spent the day reading comics and I attempted unsuccessfully to work on
1 comment
Read more 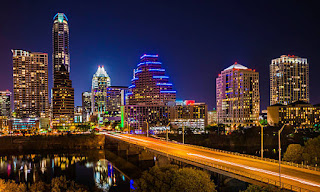 Previously on The Diagnosis: Master List of Posts It was the best of times, it was the worst of times. The first year of life out on my own was exciting in its newness but also truly a test for me, for Ryan, and for our relationship. My transplanted kidney was sputtering to its end, and in its wake brought a slew of challenging migraines that became increasingly resistant to the Imitrex. This meant more and more trips to the hospital. Because I was focused on other aspects of my life, the specifics of my health during this time are difficult for me to recall. Ryan remembers hospital trips as a blur of handing me barf buckets. Wasn't I a catch? But I'm getting ahead of myself, so let's back up. After graduation I moved an hour up the road to Austin.  Austin! None of these buildings were there in 1998. Ryan still had two weeks left on his apartment lease, so we loaded all of my stuff into a storage unit until we could move into our larger place. At the end of May we transport
Post a Comment
Read more 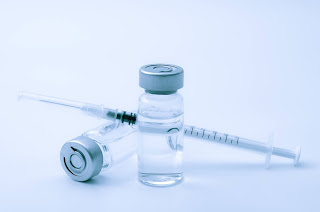 Monday morning when I got home from dialysis I signed up with Austin Public Health to get pre-approved for the current round of vaccines. Though our clinic is technically supposed to be receiving the shots "at any time," we've also been in that designation for almost a month.  I made it through the virtual paperwork and got in their system. The schedule showed no available appointments, which was not a surprise.  As I was setting aside my laptop to go upstairs for my post-dialysis nap, my phone dinged with a text.  We have appointments available, please check now! Oh boy! Maybe someone cancelled. I quickly hopped back online to secure my spot. There were an awful lot of spinning icons and then, "sorry our page is being bombarded please try again." Over and over I went through the process, mindlessly pressing buttons until EUREKA!  There was a spot at 11:00-11:30 that morning, 15 minutes from my house. I snatched it up. Furiously I ran upstairs to throw on real p
1 comment
Read more 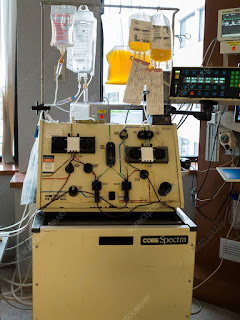 Previously on The Diagnosis: Master List of Chapters Ryan and I both ended up taking a victory lap at college. He was working on adding a second major and I was still playing catch up from my lost transplant semester. This put both of us in single apartments so we were without roommates for the first time.  I had managed to mostly stay out of trouble for a long while. Though I still went in for regular check-ups, my "first" senior year saw no hospital stays, no biopsies, no signs of rejection. This good luck streak came to a screeching halt at the end of the first semester of my last year of school. My creatinine had once again been creeping up as Christmas break grew near. Also, I had gained an alarming amount of weight in a short amount of time. I can't remember the specifics of why my mother flew in to attend an appointment, but it must have been that we knew things were not going well and we needed all hands on deck to make some decisions. Dr. Riley had IDEAS. First o
Post a Comment
Read more

January 31, 2021
Links to all entries of The Diagnosis: 1.  The Diagnosis 2.  The Side Effects of Elective Surgery 3.  Transplant One 4.  College 5. Plasmapheresis and Calculus II 5. Austin 6. Dialysis One
Post a Comment
Read more

January 24, 2021
Previously on The Diagnosis: The Diagnosis The Side Effects of Elective Surgery Transplant One After the transplant I settled into learning how to function as a human again and the spring of 1994 was uneventful. In April I got to go for a weekend to visit my buddies at Trinity and take care of some business, getting my summer school classes approved, meeting with my advisor, and taking my place aside my roommate for the next year to secure a room in our preferred dorm. I would be suitemating with Shannon and Erica and rooming with our friend Leslie. Transferring entry level classes was fairly easy and I was going to be getting two of them out of the way from Cameron University at home in Lawton that summer. At that point I had just twelve hours at Trinity under my belt and I was woefully behind. By mid-way through July summer school was over. My mother was a planner and spontaneity was not her strong suit, so when she did something unexpected it was delightful. Doug and my dad started
Post a Comment
Read more

January 17, 2021
Previously on The Diagnosis: Part 1: The Diagnosis Part 2: The Side-Effects of Elective Surgery The freshman class of Trinity University had been instructed to arrive a few days before classes began for orientation. I had managed to gain sufficient weight and though my energy level was sub-par, I was deemed healthy enough to go off to college. So at the very tail end of August 1993, my parents and I loaded up the Sundance and one of their cars and we caravanned south to San Antonio.  I did not know anyone going into the semester, aside from a few stray science camp attendees that were not close friends. My roommate had been assigned by the university about a month ahead of time. Shannon had called me a few weeks before school started and we had a really great conversation. I filled her in on my medical woes and she wasn't phased in the slightest. I felt better about school already. Our suitemate, Erica, was Shannon's best friend. They had opted not to room together so they coul
Post a Comment
Read more

January 10, 2021
Part 1: The Diagnosis can be read here By the time I was in junior high it was apparent I was developing a receding chin. It was really not a big deal, a lot of people are built this way (think Carol Burnett before her surgery), but my orthodontist dad had tried everything in his arsenal to fix the problem in his own office and told me someday surgery would be an option. My mom was especially eager about this idea, probably because she had a weak chin of her own, though not nearly as pronounced, and likely felt responsible for passing that feature on to me. They had a full plan in place, that I should wait until after high school when I would be 18. I would be old enough to reasonably undergo surgery then and it would be less weird showing up at college where no one knew what I looked like. At the time I thought there was no way in hell was I voluntarily going under the knife for something cosmetic. The parents didn't press the matter and more or less dropped it. Midway through the
Post a Comment
Read more

The moment I suspected something was not right with me I was at a science camp for high schoolers at Trinity University the summer before my senior year. I was sitting by the pool with a fellow camper and a University student counselor when I noticed my ankles were swollen. My companions agreed that was strange, but since I was preoccupied by a pretty packed schedule at the three week camp, I put it on the back-burner and would consult with my parents if it was still a problem when I got home. It was. When I say my ankles were swollen, I mean painfully so. My mom had me into our family practitioner's office within days of my return. He immediately ordered a set of labs including bloodwork and more importantly, a urine sample. He suspected the kidneys were involved. A couple of days later I was at home by myself in our temporary apartment. We had sold and moved out of the spacious home of my childhood two months earlier and were living on top of each other in a cramped condo with a
Post a Comment
Read more
More posts