Showing posts from November 8, 2020
Show all 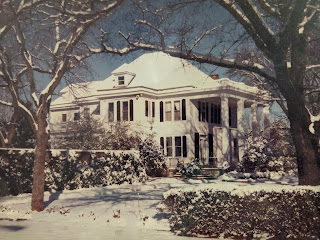 My childhood home was built in 1905 in the city of Lawton, two years before Oklahoma became a state. It was two stories, but the semi-submerged basement and attic with vaulted ceiling made it seem bigger than that. Also I was four when we moved in and I'd only ever known a small one story home, so it felt like we were moving into a castle. Front/side view. The only time it ever snowed on Christmas. 1985. We were suddenly living in a home where you could sometimes not hear another person even if they shouted. It came equipped with a janky intercom system, which I assume when it was installed could be used for actual talking, but by 1979 when we moved in had devolved into just a noisy buzzer sound. It was LOUD, but effective. Basically it allowed you to scare the crap out of someone on the other side of the house. The basement was composed of three rooms, a half-bath, and an adjacent and even more subterranean cellar. No one ever went into the cellar apart from my dad. We wouldn'
Post a Comment
Read more
More posts