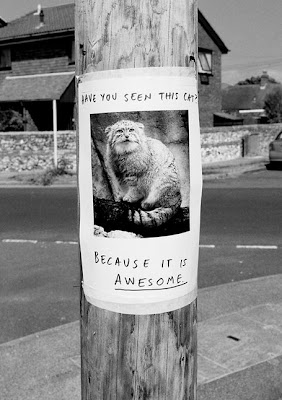 January 28, 2009
The League has posted some questions on his site and because I've been having trouble coming up with content recently, I'm going to answer them here. 1) Kate Winslet or Cate Blanchett? Kate Winslet. 2) What song are you listening to on repeat these days? Since Ryan already mentioned Gnarls Barkley "Run" and TV on the Radio "Halfway Home" I'll go with Spoon "Finer Feelings" and Kenna "Out of Control (State of Emotion)". And I don't know if I'll ever get tired of Gorillaz "19/2000 [Soulchild Remix]". 3) Matt Damon or Daniel Craig? Daniel Craig 4) Ninja or Samurai? Ninja 5) Are we being visited by intelligent extra-terrestrials? Why or why not? Maybe we're being visited by really dumb extra-terrestrials. 6) Would you go see a new Conan movie? And would you be more or less likely to see it if they cast the Governor of California upon his exit from office? Oh God, no. I just can't make myself get in
Post a Comment
Read more

January 26, 2009
I am on the verge of requesting some kind of Platinum status with our veterinarian. We've been in and out of there so many times the last time I checked out with Lucy the snarky receptionist said: "See you tomorrow!" The awful week we had saying goodbye to Mel we were literally in there every day, but since then Lucy has had three separate incidents, all of them involving her digestive system. We went to Houston this weekend to visit Ryan's grandfather (he moved to a care facility there last year - it was nice to see him and to visit with Karebear). Anyway, we brought Lucy with us for the first time ever. She's finally old enough to behave herself alone in a strange house, but we left her with a rather large rawhide which it appears she failed to chew before swallowing. That combined with a bit of carsickness led to much barfing last night and this morning, and yet another trip to the vet. Le sigh.
1 comment
Read more
More posts