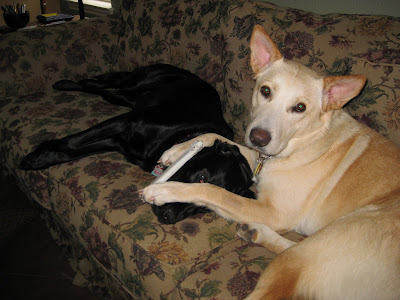 September 10, 2009
Rain I'm glad I went to the grocery store before the rain started. I kept eyeing the darkening clouds on the way to my car and luckily I got home just in time. We need rain so bad, though, so this is a good thing. The dogs disagree and Scout was forlornly staring out the window earlier. It was kind of sad. Thankfully Ryan got up this morning before work and took Lucy and Scout for a walk so they're tired enough for sleeping away the afternoon instead of letting the storm make them anxious. Plumbing So the plumber was supposed to stop by yesterday afternoon to fix our leaking sink. At noon he called to touch base. At 4 he called to let me know his current job was giving him more trouble than he had anticipated and he was running late. At 7 I tried calling him twice to see if he could just come this morning instead, but had to leave a message on his cell phone. Since I didn't have a sink, we had to go out for dinner, so Ryan and I left a note on the door saying fo
3 comments
Read more

September 08, 2009
One step forward, three steps back So last week Scout learned to sit. I know I posted a picture of her sitting the previous week, but I think that was due more to coincidence than her comprehension. But now she's got it down. She'll do it mostly with the first request and even sans edible reward. We're also well on our way to "lie down" as she hears it all the time. She is picking up the art of fetching, although not so much with the "giving back" once she's returned to the porch. Then again Mel was never so good at that part, either. She's been pretty good when we leave her alone, up until Sunday night. Scout had a major anxiety attack while we were out at Ryan's parents' house and took her frustration out on a number of Ryan's books. If you'd like details, you can read Ryan's account of the incident . Scout is clearly not as comfortable here as we assumed, which is normal for an animal in a new environment, but no
1 comment
Read more

Pictures I found while cleaning my closet, or: Why Doug and I get along so well 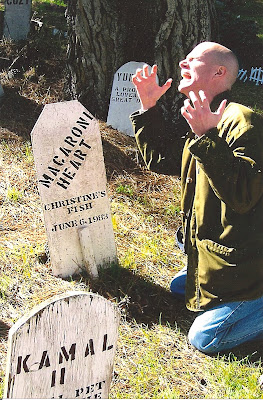 Doug visits a pet cemetery These were taken completely independent of each other, years apart:
4 comments
Read more
More posts