July 03, 2008
I loved the 4th of July as a kid. My dad would drive us to the firework stand on the south end of town and we'd stock up on small fireworks for the backyard. Even in the relatively small community of Lawton, OK, fireworks were illegal inside city limits so we stuck to mild explosives such as snakes, chickens, tanks and sparklers.

The Snake is the least amusing 'firework' ever conceived.

We felt confident that most of these tame fireworks would neither attract attention nor ignite the shrubbery, although we did have a scare one year when we branched out with a product labeled 'bees'. They advertised themselves as colorful spinning lights but said nothing about 'flight' so they were determined safe enough for purchase. When we lit the first one, however, we all watched in horror as it immediately whizzed 30 feet into the air into the branches of our large Oak. Luckily we'd had enough rain that year that the tree did not catch on fire, but the remaining 'bees' were tossed.

Apart from the fireworks, there was swimming (we had a pool), grilling of burgers and hot dogs (freedom meats), and an evening trek to Lake Lawtonka. The lake area being outside of city limits made it a minefield from folks setting off the largest fireworks they could find. We would sit on top of the car and observe the novice displays as well as the professional show from nearby Fort Sill. On the way home we would pass out in the backseat of the car, exhausted from the excitement and food. Good times.

About two years ago, Ryan and I returned to Austin from a four year stint in Chandler, AZ, about 40 minutes from Phoenix. While I don't have great memories of Arizona (it was just a rough time for us - no offense, Phoenicians), I did love being there on the 4th. Phoenix is extremely spread out with lots of suburbs, and the landscape is mostly flat. This meant that on the 4th we could climb onto the roof of our house and be able to view the firework displays of all the different surrounding communities: Chandler, Gilbert, Mesa, Tempe, Ahwatukee, and sometimes Phoenix. Fantastic. 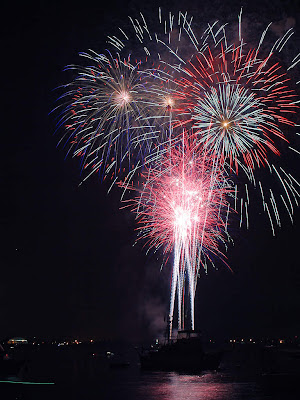 From what I remember of the Austin show, the city does a great job with the fireworks on Town Lake. Navigating the crowd in the park is no easy feat, however. One year we came up with a brilliant plan of going to the Barton Creek mall parking lot for a better vantage point, but unfortunately half of south Austin had the same idea. Luckily this year the Admiral and KareBear (Ryan's mum and dad) will be staying at a hotel downtown, so we'll be going there to try and enjoy the festivities.

What are some of your favorite 4th of July memories?
holidays

Anonymous said…
This is my second 4th of July as an American, can you believe it!? I love American celebrations!!!!

Anonymous said…
Jamie...I am Ryan's old HS pal Meredith and have been following your blog the past few days....congrats!!!

Okay had to share a memory...my dad and his 4 brothers (yes, trouble) used to tie up hermit crabs and anything else with legs and shoot them off on bottle rockets over the Colorado River where they have a house....they do this every year. They get drunk and shoot poor, unsuspecting animals into the air for our amusement.

We don't get down there much for the 4th anymore, but I still picture them getting crazy on the pier with the whole Beyer crew....thanks for the jog down memory lane...
July 4, 2008 at 12:26 PM

Anonymous said…
I always thought the snake made it look like the ground itself was pooping.
July 4, 2008 at 1:18 PM

Unknown said…
I have this great photo of my sister and I taken on July 4, 1976. We are wearing matching Bicentennial t-shirts and we are very excited, and of course I'm the cuter one.
July 7, 2008 at 8:43 AM

Anonymous said…
the best part of the snake is its post-burning residue. i love the black spots left on the sidewalk that are still visible at christmas. while escaping the painful awkwardness happening inside my house at christmas as a kid, i would sneak outside and admire the leftover snake spots and think of happier holidays. snakes made me smile six months after lighting them.
July 8, 2008 at 2:01 PM