August 19, 2008
Last night on our way home from letting some furniture delivery guys into my parents' house in San Marcos, we stopped at T.G.I.Friday's* for dinner. Neither of us had a specific craving for Friday's, it was just on the way and we were hungry. It's going to be a good long while before we return, at least until I forget how sucktastic it is.

We didn't have any of the big chain restaurants in Lawton when I was growing up, so eating at a Chili's, Bennigan's, or the OG** when we were in Dallas or Houston was something of a treat. I remember thinking back then the food was actually good, maybe just because we didn't eat out all that often. Nowadays, Lawton is littered with all the favorites, with Outback Steakhouse, Applebees, and Chili's in the same block. There is even, after 20 years of it's rumored arrival, an Olive Garden. 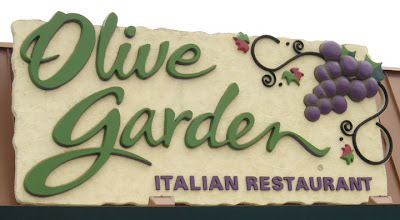 I haven't been to the Olive Garden in like, forever!

Ryan and I were discussing this as we left the restaurant, that food at chain restaurants used to be grilled/cooked right there in the kitchens as opposed to popping a frozen chicken patty in the microwave***. These days the food has the unique ability to LOOK exactly like the menu pictures, but taste as fresh as a Hot Pocket smothered in Jack Daniel's sauce. It's not just the food that screams mediocrity. It's all about fake fun. Fake fun is a term we in the Steans family started using a few years ago to describe the methods used to convince people they are having a GOOD TIME. Fake fun is obnoxious waiters who chummily slide next to you in your booth to take your order. Fake fun is wall flair: random objects barfed up on the walls intended to look like priceless artifacts from American culture but whose mass construction in a warehouse somewhere couldn't make them less original. Fake fun is the bland Clear Channel pop wrestling for your attention with the 15 TVs hanging over the bar. 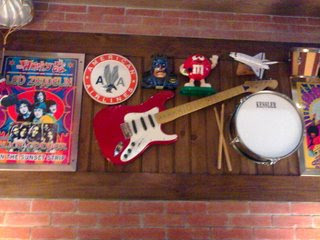 I have no question as to the motivation of fake fun tactics. But don't try to make me think your establishment is unique and wacky by throwing giant pool balls on the walls. And for God's sake, try a little harder on the food. That was gross.

*Emphasizing my point, I chose not to link to the Friday's site due to the blaring 'good times' music
**ditto for Olive Garden
***I have no evidence of microwaved food, but I am highly suspicious
random rants

Steven said…
I seem to recall a recent visit to the OG where you, your SO, your SO's genetic poolmate and my SO were all present?

Or did fake famiglia not etch itself into your memory indelibly enough?
August 19, 2008 at 3:26 PM

Incidentally, I'm happy to join you on a quest to find good, non-chain restaurants around Austin (or at least not big, national chains). It's good for local business, and it'll be fun for us!
August 19, 2008 at 8:26 PM

The League said…
Sorry for removing comment. Too many type-o's.

I confess to a certain liking of the OG. I can't say no to breadsticks and salad. And its hard to go wrong with their basics. I just don't get why its always so crowded.

Or why there aren't really that many other options for spaghetti that aren't a huge chain like Carrabba's, Macaroni Grill, etc...

The beauty of the OG is that if you don't have much of a wait, you add friends and booze and really soak in the delightful Italian stereotype, its a good time.

As per TGI Friday's: My entree at Fridays was a pair of chicken breasts, which were pretty clearly formerly frozen, and pretty clearly NOT actually grilled in order to be cooked. I cook chicken at home. I know what the hell grilled chicken looks, smells and tastes like. This met none of those qualifications. I have no idea how they were actually prepared.

The League said…
That may be so, but if you're selling me BBQ, don't try to fake it. I ordered the chicken off "The Jack Daniel's Grill" section of the menu, which i would have assumed meant the chicken was grilled.
August 21, 2008 at 9:23 AM

Anonymous said…
I think they have a grill-looking branding iron in the back that they use to stamp the meat before sending it out. Pretty sure that was what happened to your chicken.
August 21, 2008 at 4:06 PM

mcsteans said…
Actually, we went to the Olive Garden, like, last night. They were having their neverending pasta bowl (which none of us made it past the first bowl), and I had 2 bowls of salad, 2 breadsticks, and almost an entire bowl of pasta. Bleargh.
August 26, 2008 at 5:27 PM

Anonymous said…
Sucktastic - I love it! I think you may have just invented my new favorite word!

I was considering a career switch. How much do you think one earns to be an "Interior Flair Decorator" for these chains?
August 27, 2008 at 8:34 PM