July 15, 2008
We've had our black lab Lucy since she was 2 months old, and her first year was the closest I'll ever come to raising kids (I don't dislike kids, it's just not in the cards for us). Her first two nights in our house in Arizona gave me sympathy for those who have ever lived with a newborn. We could hear her loudly crying ALL NIGHT in her kitchen crate from our adjacent bedroom.

I don't know if you're familiar with labradors, but lab puppies are a little like fuzzy tornadoes. Lucy had (and still has but not to the same extreme) the crazy eyes. She ate every object in the backyard: lawn chairs, rocks, towels, all 13 of our sprinkler heads. I even once glanced out the back window to see her running by with the rake in tow. Training sessions with her were like pulling teeth - she was physically unable to focus on anything but Jeff the Cat inside the house, even when he was out of the room. Her eyes remained locked on his last known position throughout the lessons. Because she wouldn't even let you hold her without flopping like a fish, she earned the nickname, "Squirmy Worm". 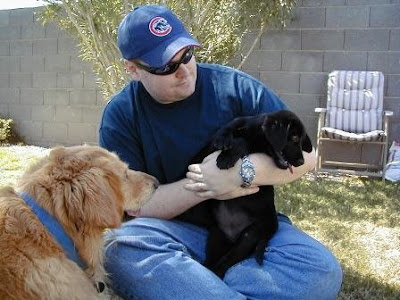 Now that she's 3, Lucy has calmed down a great deal, but has retained her intense energy. We never quite mastered walking on a leash so excursions are a bit of a nightmare. She pulls so hard she chokes herself and makes awful wheezing noises. We finally switched her to a harness which seems to have cut down on the choking, but not the dragging. If I could construct a machine that could harness her spasticity, I would be celebrated for solving the current energy crisis. 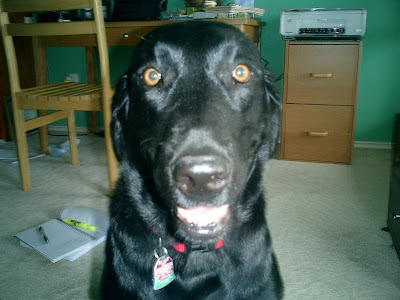 Could easily power south Austin, if not for her noxious gasses
pets

The League said…
The first two year with Lucy were... challenging. But I think the last year or so, and what a good little dog she's become, has been a sort of neat progression.

Anyway, she still doesn't get the preferential treatment Mel receives, and we have the occasional relapse to some horrendous behavior, but I think we've all come to an understanding.
July 16, 2008 at 3:15 AM

Anonymous said…
AV,無碼,a片免費看,自拍貼圖,伊莉,微風論壇,成人聊天室,成人電影,成人文學,成人貼圖區,成人網站,一葉情貼圖片區,色情漫畫,言情小說,情色論壇,臺灣情色網,色情影片,色情,成人影城,080視訊聊天室,a片,A漫,h漫,麗的色遊戲,同志色教館,AV女優,SEX,咆哮小老鼠,85cc免費影片,正妹牆,ut聊天室,豆豆聊天室,聊天室,情色小說,aio,成人,微風成人,做愛,成人貼圖,18成人,嘟嘟成人網,aio交友愛情館,情色文學,色情小說,色情網站,情色,A片下載,嘟嘟情人色網,成人影片,成人圖片,成人文章,成人小說,成人漫畫,視訊聊天室,性愛,聊天室,情色,a片,AV女優
February 7, 2010 at 5:28 AM