November 20, 2008
Tuesday morning I piled the dogs in the car to take them down to Happy Hills Puppy Farm (aka, my parents' half acre of backyard in San Marcos). The dogs love it there and it was great to see Lucy leaping over their decorative wall in pursuit of tennis balls and random woodland creatures. Tuesday was a lovely 72°, so Mel spent some time flipping around on his back, attempting to maximize sun exposure to his tummy. I'll have to start taking them down there more often.

My mom and I had plans to see the 12:00 show of "The Secret Life of Bees" since we both liked the book and were curious, despite mediocre reviews, about the movie. I was slightly shocked to see my dad heading to the car with us for such a girly movie, but then realized that's just how bored he is already. He's only been retired since September. This is not a good sign.

Someone made a crack about there not being any tickets available as we turned into the deserted theater parking lot, but we then realized walking to the ticket counter that they had cancelled all shows before 2:00 and just didn't post it on the website. Nice. 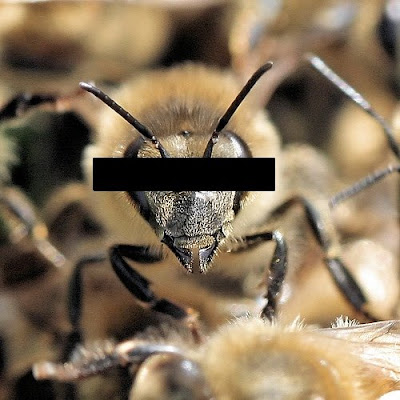 Now we'll never know what the bees are up to

Our movie plans spoiled, we came up with the idea to go bowling. We bowled a lot when Doug and I were kids. Sports not being our forté, bowling was one activity we could manage without hurting ourselves.

There's only one bowling alley in San Marcos (I still find that hard to believe, but whatever), so we made our way to Sunset Bowling Lanes, only to find it full of Texas State undergrads knocking out a course credit. I went to the wrong school. I had to take raquetball for my PE credit at Trinity, which was neither fun for me nor safe for my classmates (I had a little problem with aim).

Anyhoo, they did have one lane open, so we found some shoes, grabbed some snacks, and started bowling. I wasn't expecting much out of my performance since it's been at least 3 years since I've bowled (Wii bowling does, apparently, NOT count). So I was shocked that the first time I sent the ball down the lane I got a strike.

This was, however, a fluke. 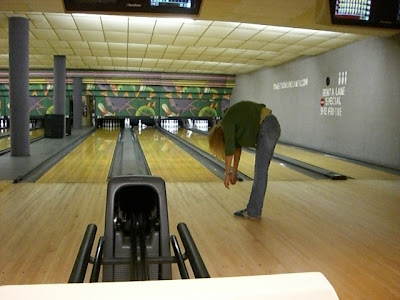 I bowled possibly the worst 2 games of my adult life, scoring an 84 and a 79. I think from now on I'll stick to Wii sports.
movies parents

J.S. said…
Hey, I think I remember reading that Obama scored in the low 80s when he took his family bowling while on the campaign trail- so you're doing as well as the president!!!
November 21, 2008 at 10:38 AM