February 10, 2009
The first time I saw a roadrunner in real life was in Arizona. I only ever saw them when I was driving because, well, they have a habit of quickly darting in front of your car. Thus the name I suppose. They are quite cute and extremely fast, clocking up to 17 mph. Though you may have been lead to believe otherwise, they are only about 10 inches tall and not the same size as, say, a coyote. 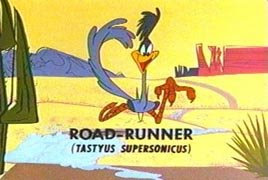 Would be terrifying if actually this size

Lucy and I, in the spirit of fulfilling our New Year's resolution, have been taking walks around our neighborhood on my non-dialysis days. I've given up trying to train her to walk by my side and instead use her steam train Labrador energy for resistance training by pulling back on the leash. We take a nice, woodsy path that circles our neighborhood that takes about a half hour to complete.

The past three times we've walked, without fail as we round a particular curve, we've seen a roadrunner cross the path. In exactly the same place every time. I'm starting to get suspicious of this bird. What is it up to? Does it suspect Lucy may some day strap on roller skates and a rocket?

On further investigation, it seems I have every right to fear the bird. According to this site:

Because of its lightening quickness, the roadrunner is one of the few animals that preys upon rattlesnakes. Using its wings like a matador's cape, it snaps up a coiled rattlesnake by the tail, cracks it like a whip and repeatedly slams its head against the ground till dead.

I.....don't even know what to say. Perhaps we'll start keeping to the neighborhood.
pets random

mcsteans said…
Oops, had an accident with my comment, moving along...

What I meant to say was: Steanso, did you not see the part about the whipping of the snake and the slamming of the head? I don't want Lucy anywhere near that thing.
February 11, 2009 at 5:45 PM