May 07, 2009
Well, I stepped on a rock this morning while walking Lucy and twisted my foot. Yay. I'm sure nothing's broken, but having learned my lesson last time*, I flopped on the couch with an ice pack as soon as we got home.

*Last time being when I kicked the wall while playing with Lucy indoors (we now have a ball outside only rule), then proceeded to spend all day walking around at Eeyore's Birthday making it 10 times worse and ending up in the ER that night.

So here I am, not doing all the things I need to get done on a dialysis-free day. Not mowing the yard. Not ironing clothes. Not helping my mom clean. (What? She wanted to come! Really!) I need to let it go. The world will not end.

Anyone catch Lost last night? As the season's penultimate episode, I thought it was pretty good, but inferior to last season's next to last episode masterpiece.

I'll have to watch it again, but it just seemed underwhelming to me - from the lack of epic musical themes to the hilariously bad CGI submarine. It just felt like a lot of people getting smacked around and little plot development. 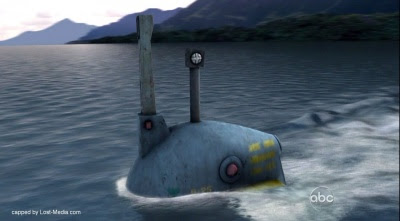 This would have looked amazing in 1992.

STOP READING NOW IF YOU HAVE NOT SEEN THE EPISODE.

YOU HAVE BEEN WARNED

Ok, that should be enough room. Soooo, I REALLY don't get Jack's plan and I'm not entirely sure Jack gets Jack's plan. They're going to make it so that the plane never crashed?

a) If this show ends up making it so that NONE OF THIS EVER HAPPENED, I will be SERIOUSLY pissed. You and I will be done professionally, show. Well, I suppose we'd be done anyway since the show is almost over, but still.

b) I realize that many people died on the flight as well as many additional red shirts in their time on the island, but the show made a huge point of telling us how crappy most of the characters lives were before the crash.

c) Detonating a hydrogen bomb. What could go wrong?

d) Jack has never made a bad decision before, right? Right?

Here's to hoping Jack's plan goes as well as all his previous plans have.

I'm not one of those people who keep complaining about not getting answers fast enough - the show's got another whole season, they're not going to spill everything yet. Still, I felt like we learned very little this go around.

I don't mean to give the impression that I disliked the episode. It had a lot of good Losty stuff like Hurley being hilarious and Ben making great Ben faces, but Lost has set the bar so high for itself that I was expecting to be blown away. I'm just now expecting next week's finale to be even better. I honestly just feel unsatisfied, like I have absolutely no idea where this show is heading. But really, that's probably exactly where the producers want us to be. And if the payoff next week is worth all the confusion? I'll forgive them.
lost medical

J.S. said…
See, what annoyed me when I found out that there were still 2 hours left in the season was that the whole hydrogen bomb thing is never going to work- it'll end up being just another rabbit trail of a plotline on Lost (and I'm getting tired of those).
I'm just not sure that the underlying explanation for why the island is supernatural is going to end up being very satisfying (although I find myself willing to sit through endless numbers of subplots that I really don't care about it in order to find out). My personal guess is that they will eventually find out that the ghost of Harry Potter is controlling the island. Or maybe it's Skynet. Or Sauron.
Actually, in all seriousness, I think the island is going to end up being controlled by a large, nebulous, super powered entity named McGuffen.
May 8, 2009 at 9:46 AM