July 28, 2009
So, my mother has always had this weird thing against blue foods. Luckily there aren't that many edible items that come in blue, but it does mean she abstains from things like blueberry pancakes and blue M&Ms.

This morning I tried out a new snack item. We generally don't keep a lot of sugary foods in the house, unlike a few years ago. I no longer have cookies stashed in the cupboard or bags of Skittles and Hot Tamales lying around. I very rarely even indulge in my nightly bowl of cereal anymore. What I do enjoy is a mid-morning or post dialysis snack of Eggos and Starbucks frappuccino. Don't judge! Hey, the Eggos are Nutri-Grain, that's kinda healthy, right?

Anyway, the last time I was at the store I thought I would branch out and try the blueberry flavor Eggos and this morning I cracked open the box for the first time. Immediately upon placing the Eggos on the plate I suspected there was something off. 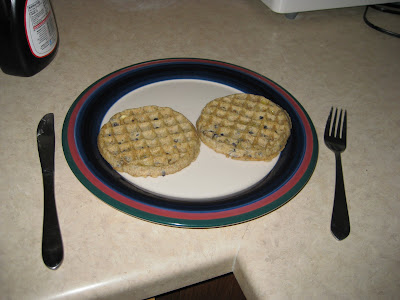 Wafting up from the plate was, unfortunately, a sickly sweet smell similar to a McDonald's McGriddle.

I guess I should have known. Eggos don't really taste like waffles - they're fake food. They have their own distinct flavor, much like Taco Bell doesn't taste like Mexican food. So adding artificial blueberry flavor to the mix actually makes them taste worse. I didn't even make it to the second waffle and was beginning to suspect my mother was on to something.

Strangely, a little later I was checking the news online and stumbled upon this article that says they've been having success with research on spinal injuries using mice treated with the same blue dye found in M&Ms. The side effect, and there always is one it seems, is that it temporarily turns the mice blue. Somehow I think folks with spinal injuries could live with the Violet Beauregarde look if it helped them walk again. I think this is an incredible breakthrough and I couldn't wait to share it with my mom. I now have new evidence that proves the blue M&Ms are not as evil as she claims.
confessions medical parents taste tests