July 11, 2009
Today was the first time we've been able to visit Barton Springs in about 3 weeks and it happened to be a free day. We'd already planned to head out early to try and beat the crowds, but then discovered by watching News 8 that there was no fee at the pool today, which meant to expect an absolute zoo. After swinging by the Hop-a-Long Lounge to collect Jason, we arrived poolside around 11:30. 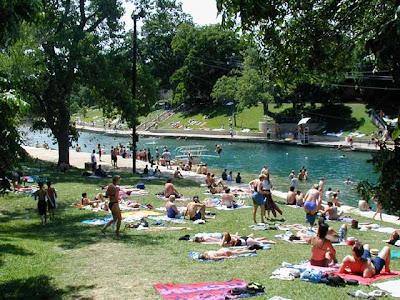 I finally got the chance to use my new $.99* float, which was nice. Floats are perfect at Barton Springs. It's too cold to remain submerged for any length of time and it gets too hot sitting up on the hill. If you're camped up on a float you can splash yourself every so often to cool off.

Anyhoo, after we'd been in the water for about 10 minutes, Ryan spotted a man in distress being treated poolside. We couldn't figure out if he was having heart issues or couldn't breathe, or what, but EMS showed up and eventually carted him off. He appeared to be conscious and talking, though, so that's good.

About 10 minutes after that, we heard the lifeguard whistles go off, followed by repeated shouts of, "EVERYBODY OUT OF THE POOL!". Miraculously, the pool cleared in under 3 minutes, save one gentleman who was doing some laps.

Apparently (this heard fourth hand as passed through the crowd) someone thought they saw a child go under and never come back up. Then a lifeguard found a small life vest pinned under a rock. Scary stuff, so the pool was cleared and we got to witness the lifeguards executing their rescue training. This involved a line of swimmers as well as a couple of scuba dudes sweeping the pool twice.

In the end it was thankfully declared a false alarm, but it was nice to see the lifeguards on top of things. Hats off to them.

This whole process took upwards of 45 minutes. While we really had no idea when we'd be allowed back into the pool we were left baking on the hill and debating whether or not to take off. We took refuge under the shade of a tree after about 30 minutes. One clueless couple sauntered down the hill with their pool noodles, amazingly failed to notice no one else was in the pool, and jumped right in. Ryan, Jason, and I gave them the slow clap.

We did finally get to jump in one last time before leaving.

UPDATE: OK, this is where my broken telephone style reporting has failed me. Apparently people thought they saw a man wearing goggles who wasn't moving at the bottom of the pool.

*This isn't the first time I've noticed this, but when did keyboards lose the cent symbol? I'm sure there's some code to get it, but I'm too lazy to look it up.
recreation