September 01, 2009
Scout is fitting in with Steansclan nicely. For a while after she realized there was a cat, she spent all of Jeff's time downstairs attempting to alert us to his presence.

We haven't had any major property damage aside from the power cable incidents, although she has a fondness for liberating shoelaces. We've had to relocate all shoes from the shoe caddy by the back door to the safety of the stairs behind the baby gate.

Scout and Lucy are getting along swimmingly. They go for walks together, play in the backyard, play inside, steal each others toys. I even caught them sleeping on the floor the other day with Lucy resting her head on Scout's stomach. It was painfully cute, but unfortunately I was cameraless. 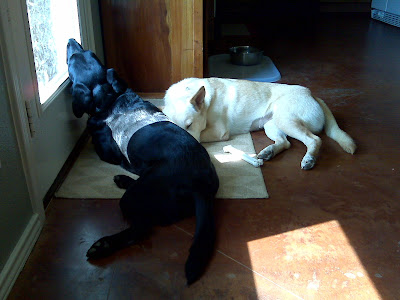 In the process of dorking around with the camera on my new BlackBerry, I finally got Scout to "Sit" today, which we've been working on for weeks. The sad thing was, I was so busy trying to frame Lucy and Scout in my shot by tempting them with a treat, I didn't even realize Scout had her butt on the ground and was waiting paitiently until after I had snapped my picture. 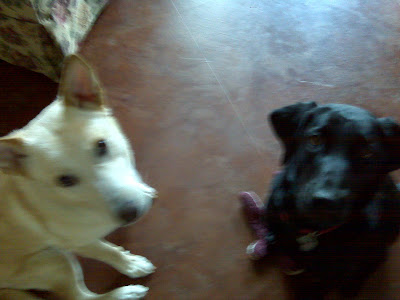 Give me the damn treat already
pets

The League said…
And if the waggliness when Jamie walks in the door is any indication, she is quite glad to be living at our place.

Poor Lucy looks shell-shocked, though. We have to make extra effort to remind her she is still loved.
September 2, 2009 at 3:51 PM