March 31, 2010
I haven't done a dialysis post in a while, and it's been a semi-interesting week at the clinic, so here goes. If you are at all squeamish about blood, I'd skip part 2 of this one. We'll catch you next time.

Part 1:
So, Monday morning I knew right off the bat was going to be troublesome. My alarm went off, I couldn't find my glasses, and I slipped my hoodie on backwards so that the hood was covering my face. These two events incidentally are independent of each other. It's always dark when I'm getting dressed so the glasses wouldn't have helped. I ended up having to put my contacts in which I don't like to do before dialysis because it wastes time when I'm getting ready and on the off chance I can actually sleep during treatment, they make my eyes feel funny.

Don't ask me what any of this has to do with how treatment goes and maybe I'm just superstitious, but it seems like something almost always goes wonky when I wake up on the wrong side of the bed.

Sure enough, there was a problem.

Dialysis does two major things, as do your kidneys. Firstly, it cleans your blood of things you don't want building up in there like potassium and phosphorus. As much as you hear about how good for you certain fruits and veggies are because potassium is good for you, if that potassium doesn't get filtered out it could build up in your system and kill you.

Not to get too technical, but by "filtered out" I mean "pee".

This is where we come to part 2 of the function of dialysis. Most people on dialysis have a significantly reduced ability to urinate. For some folks, like yours truly, it just doesn't happen at all.

I know, I know, "THANKS FOR SHARING, TROUBLES".

This is one of the most difficult adjustments people have to dialysis. You aren't allowed to drink very much fluid because you can't get rid of it and it seeps into your tissue which is really hard on your heart. Dialysis removes this fluid for you, but this removal in and of itself is hard on your body so you're not supposed to add very much between treatments.

The amount of fluid to be removed is entered into your dialysis machine prior to treatment and is determined by the amount of weight you have gained between sessions. Stay with me, this is going somewhere, I promise.

Monday after my treatment, I hopped on the scale to measure my post weight and document it on the clinic clipboard. I was a full kilogram (Dialysese is sophisticatedly metric) over where I should have been after dialyzing. One kilo may not sound like a big deal, but I regularly try to only consume 2 kilos worth of fluid between treatments. That means I had to cut in half the small amount I allow myself to drink already. I was not a happy camper.

It was a thirsty couple of days. I still don't know what went wrong. It probably wasn't anyone's fault as I may have just gotten a bad number from the scale on my pre treatment weigh in. However, I was still angry like the Hulk.

Part 2:
*HERE IS WHERE THE SQUEAMISH WILL WANT TO TUNE OUT*

Today was a completely different story. Nothing was really any different than usual, but I came to the realization of how completely unfazed I have become upon seeing blood gushing from my arm.

The clinic was short staffed on dialysis techs this morning, so much so that the clinic manager was acting as shift nurse and my usual shift nurse, we'll call her, oh, Lucy, was having to do tech duties.

A dialysis tech is the individual that puts the needles in your arm, takes them out at the end of treatment, and basically monitors you throughout your stay. The nurses have other jobs like taking vitals and distributing medications and don't do any of this.

So, poor Lucy, who I absolutely adore - she's worked there the entire 3.5 years I've been at this clinic and is totally competent, funny, nice, etc - was completely thrown off her game. Enter Troubles to make her day even more fun!

The techs are used to me and my bleeding issues. I am on Coumadin, a blood thinner, and also take a baby aspirin once a day. This means when they remove the 14 gauge (just over 2 mm diameter to give you an idea. they're pretty big as needles go) needles from my arm, it's a little like the Shining. 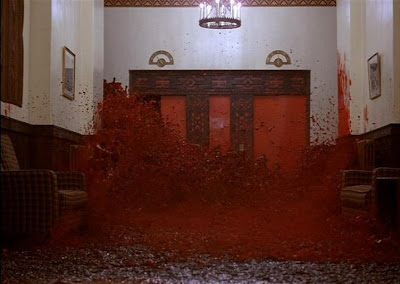 So, yeah, Lucy was freaking out a bit. I came to the realization as I calmly assisted with the switching out of gauze pads that to new eyes, this was a horrific scene. To me, however, it was just the average Wednesday.

We did eventually get the gushing under control, but the scene was a bit grizzly and I kind of looked like I'd been in a bad accident.

I wished Lucy an uneventful rest of the day before I left. I hope that the clinic gets its s@#$ together and makes sure that enough techs are going to show up so that she doesn't have to do that again. Or at least doesn't have to work with me.
medical

Ashley Ashbee said…
You know, I also blog about my long history with health issues and I've read many other blogs about others' health issues. I don't think any entries have been as descriptive and candid as this. Thanks for sharing. I will definitely add you to my blogroll.

"Stay with me, this is going somewhere, I promise." I don't think you have to worry about having lost any readers after the first section of this entry.
April 7, 2010 at 5:50 PM

mcsteans said…
Welcome, loveable_homebody! Thanks for your kind words. They are always encouraging to hear, especially since I'm not always sure how eager folks are to read about my medical adventures. It's good to know there is interest.

I am sorry about your own health misfortunes - it sounds like it's a daily struggle and you've been dealing with them for a long time. I hope writing about it helps somewhat!
April 15, 2010 at 7:50 AM