Ryan and I met at a party my freshman year at Trinity University in San Antonio. I had been randomly placed with roommates (hi Shannon and Erica!) that had gone to high school with Ryan, who was attending the University of Texas here in Austin. Ryan was down in San Antonio for the weekend visiting his brother Jason, who was a fellow Trinity Tiger (rawr).

We only chatted for a bit that night, and while I thought he was super cute, I didn't quite know what to make of this tall, *cough* slightly inebriated friend of my roommates who needed a tree for support and seemed to be trying to focus through my head to a point about a foot behind me.

While subsequent meetings went much better than our first introduction, they were few and far between. I only saw him once more that year and twice our sophomore year, but he made an impression on me and I looked forward to our rare meetings.

The stars finally aligned our junior year when Shannon, Erica and I went up to Austin for fall break to visit Shannon's then boyfriend and now husband Josh and to celebrate Erica's birthday. We officially began dating October 28, 1995.

After dating semi-long distance (Austin is only an hour away from San Antonio, and I don't think we missed a single weekend visit) for 2 and a half years, I moved to Austin post graduation. For those of you doing the math, yes, we both are members of the Victory Lap Club and each did 5 years of college.

This is the tough part. I have a difficult time putting into words what Ryan means to me. I am so thankful that he entered my life at such a young age and I'm even more thankful that he is still with me today. He got me through some really rough times. Hospital stays, trips to the ER, Arizona. Things that would have been unbearable without his company.

There have been wonderful times as well. Living in Austin, buying a house, raising three crazy dogs and a cantankerous cat, spending time with family and friends, and just spending time together. Ryan makes every day more enjoyable, no matter what is going on in our lives. 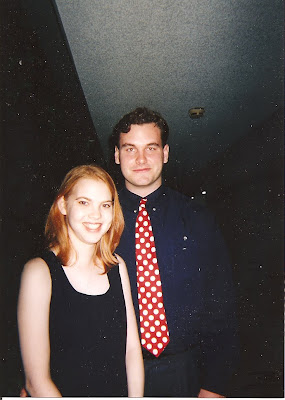 1996. Ryan is making the exact same face that his Wii Mii makes 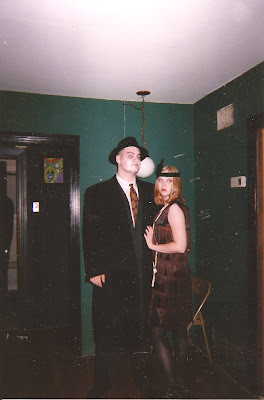 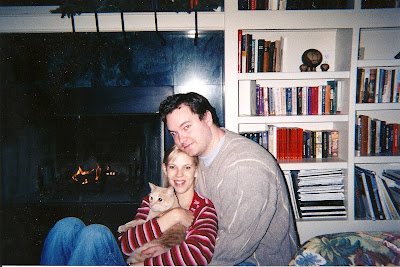 Christmas 2000 - Our first as a married couple. Also: Jeff the Cat 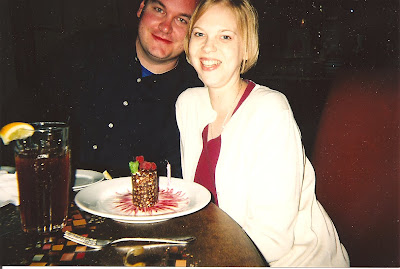