Change of scenery and Scout update

Sometime after the 4th of July, the date of our sadly missed Minnesota trip, Ryan hopped online and reserved us an Airbnb out by Lake Travis for October. Just for a weekend. If you read my previous post about Hawaii, you might remember that dialysis clinics are not currently taking travellers so therefore my roaming is limited for the foreseeable future. But we were starting to go a little bonkers staring at these walls and repeating the same motions day after day, so last weekend we set out for a less than 2 day trip away from home.

Ryan found this adorable yet spacious one story house with a gorgeous view with the lake in the distance. Not ON the lake, but up the hill a ways. Here, see for yourself: 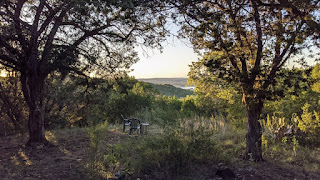 view from the porch

Because we are still in Covid Times, we brought all of our own food. Nothing special, since we didn't want to spend a lot of time cooking or cleaning up, but there was a nice grill on the back porch so we made chicken and burgers.

Scout also enjoyed chicken and burgers, because she eats whatever she wants now. Oh yeah, Scout came with. It's the first time we've ever brought a dog on vacation with us and I was nervous about how that would go down. She absolutely hates the car and new locations, so I imagined an entire weekend of her nervously pacing the length of the house.

She did great. We have anxiety pills to give her before a traumatic event (storm, fireworks, etc), so those were administered pre-car ride. She was feeling pretty groovy. Once we arrived, she was predictably skeptical about the new abode, but calmed down soon enough. It helped that she was tired from the excitement and drugs.

So tired that she actually used the expensive dog bed Ryan had purchased for her months ago to relieve the stress of having to launch her twelve year old body onto the couch every time she wants to lie down. That thing has been sitting on the floor since June and she wouldn't even look at it. But for some reason she made an exception just this once. 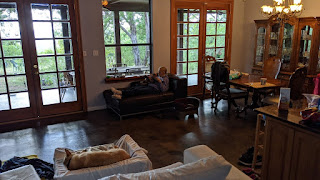 evidence of dog bed usage
All of the cabin rooms were spacious, including the master bathroom with its corner bathtub and large windows. The windows were a bit unnerving, but really the only danger of spying eyes would be a passing deer or bigfoot. I also realized that it was the first time I'd used a restroom outside of my own house since February. The bathroom also had this: This is the coolest of all frogs. There is none higher.
My intention for the weekend was to go social media free, though I brought my phone for emergencies. Entertainment was a stack of graphic novels that had been piling up on the coffee table and a deck of cards.
Playing cards take me back to my childhood and vacations, especially Minnesota. Minnesota trips were all about getting away from civilization, enjoying nature, and relaxing. We read books, fished, canoed, hiked, and also played a lot of cards. Whether it was getting my pants kicked by my mother in gin rummy or just playing myself in solitaire, a deck of cards could provide hours of entertainment.
Ryan was a good sport and spent some time with me and the cards at the dining room table. We tried to remember how to play gin rummy, go fish, and started one game of War before remembering how stupid it is. Mainly, though, I sat at that table and played solitaire in front of the big picture windows. Just the act of shuffling the cards was soothing.
We spent a lot of time on the back porch, which ran the length of the house. Unfortunately Scout could not roam free, for fear she would run down the side of the hill and she'd twist an ankle or get lost, but she was a good sport about staying on the leash. 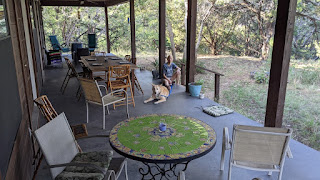 "Scout live here now?"
We were lucky enough to see a few deer during our stay. One was a large eight point buck that wandered through too quickly for a picture. The females, however, stayed a while to graze. 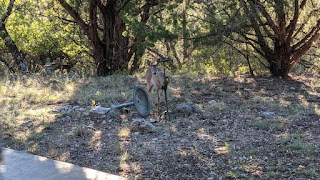 "S'up?"
Nights were cool enough for a sweatshirt, and we spent some time sitting under the stars. It's amazing how much you can see away from the light pollution of our neighborhood. We sat and listened to the crickets, frogs, and the rare North Austin screaming drunk dudebro.*
All in all, a lovely weekend. I highly recommend it if you, like us, are crawling the walls. I don't know how much longer we'll be quarantined; it could easily be another year or more. Taking breaks like this to reboot, even if you're just cutting off listening to the news and scrolling Twitter for one day, is essential for making it through.
Scout update
We took Scout to the vet last week before leaving on our trip. She was getting out of control with the not eating, and we were concerned. Sidenote, the vet experience was great. I don't know if all vets are doing this, but we never had to go into the building. Check in was done over the phone in the car, then a tech came to collect the dog. Conference with the vet was done over the phone after her exam. A+ for Tanglewood Animal Hospital.
Anyhoo, after her check up and lab work, it turns out Scout is, as we suspected, just being a picky pants. She hasn't lost any weight, and the excessive water consumption was most likely due to her getting high sodium people foods. The vet gave us the go ahead to change her food to whatever she'll eat, so I purchased her a bag of plain old Purina yesterday. She went to town.
For one week? To be continued...
*Pro tip: Sound carries. You may think you are in the middle of nowhere because there are lots of trees, but people can hear you drunkenly dropping f-bombs. Loud hyena-like laughter also carries, ladies.

Unknown said…
It's so great that you two had such a wonderful time. Sometimes all it takes is getting away from home. I loved when we went to the Poconos. Lucky to have a time share at the time. So quiet and peaceful. And good to hear that Scout had a great time. Love, xoxoxo

Steanso said…
Looks like a very nice escape. You've inspired us to book a place in November! Bound to be a bit less relaxing with the Lil' Monsters in tow...
October 22, 2020 at 8:54 AM