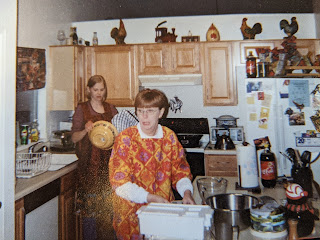 Phoenix house. I don't ever remember my mom wearing another apron. She brought it with her.
Year four of our stint in Arizona was the worst Thanksgiving ever. My parents were scheduled to come to town in addition to Doug and Kristen, who were newly dating at the time. I had just started back on dialysis, when a nasty black spot began forming on my left arm dialysis fistula. The Wednesday before Thanksgiving and the day of the family's arrival found me in the ER getting the rapidly enlarging spot examined.
I had a MRSA infection. The surgeon took one look at it and declared I would need surgery immediately. This sweet man no doubt interrupted his own holiday and wheeled me into surgery at midnight. My family came to visit me in shifts during my recovery and made and consumed turkey dinner at my house without me. They of course made sure I was never alone (Ryan was with me during the feast), and brought me leftovers, but I was incredibly disappointed at the turn of events. I had been looking forward to having everyone out for the holiday and ended up spending the entire time in the hospital.
Since moving back to Austin and both sets of parents retiring within driving distance, our Thanksgivings have been merged. There are a number of reasons these gatherings have been much more relaxed and successful than our first attempt in Phoenix, but mainly our comfort level has increased dramatically and we can all go home to our own homes after dinner. For the first few years, we would trade hosting duties. Steans's house, my parents' house in San Marcos, even our house one year.
Eight years ago my mother passed away. I will write more about her another time, because she deserves her own post, but also because I'm not quite ready for that. Just know that I miss her every day and especially at the holidays.
I have never been so thankful to have the best mother-in-law ever than after my mom died. She was there for me in every way I needed, but never tried to take my mom's place. That first Thanksgiving without my mom I decided to attempt to host at our house. It was the first and last time I made a turkey.
The night before the feast, I discovered the turkey was still almost completely frozen. If Ryan hadn't been there to calmly work through the problem, I would have lost my mind. We spent an hour trying to run lukewarm water over it to help it thaw. The next day wasn't much easier. Luckily my brother was in town to try and help decipher my mom's gravy recipe, but I was a sea of regret that I had never paid attention to this part of the Thanksgiving prep. The gravy situation had always seemed too complicated to follow, so neither Doug nor I had ever participated. Somehow, through an inept collaboration we later decided should be a tv show called "Figure It Out!", we managed to produce some gravy. It tasted ok, there just....wasn't that much of it.
Since then, Thanksgivings have been at Karen's house and more recently at Jason (my brother-in-law) and his wife Amy's house. Since Jason and Amy have kiddos now, it's just easier that way. My dad is always welcome and we have occasionally been joined by Amy's parents. These dinners have been really fun. Everyone pitches in with food (I bring the carbs - my mom's stuffing and rolls), and the turkey is smartly provided by Central Market, fully cooked. This is a genius cooking cheat, btw. The turkey tastes great, and it doesn't dominate the oven for three hours.
This year is going to be a Thanksgiving like no other. In the interest of keeping ourselves and others safe, we are having dinner by ourselves, just the two of us. After jumping on the Central Market website to order a turkey, I decided the hell with it and am just picking up the entire dinner. If there was ever a year not to have to do any cooking, it's 2020.
Which leads me to my plea. Please. Please do not have dinner with anyone outside of your quarantine group. The virus numbers have been rising exponentially, and that is largely to do with small family gatherings. I know you love your family, but if you do, you'll want to keep them safe and want to be able to see them next year. Please be smart about this and make this sacrifice, so that we can all be together again for many future Thanksgivings to come.

Mom always shone at the Holidays.