July 22, 2008
Anyone that has been to my house when I'm not expecting company knows I'm not the tidiest of people. Honestly it's good for us to have folks over frequently as it forces us to do cleanups. I don't like being this way. I wish I was one of those people (the majority of the population) who are able to put things back after they use them. Simple enough, right? But sometimes I remember to do this and other times I space out. Then the spacing out overpowers the remembering and soon I've got a cluttered living room.

Having animals doesn't help. About a year ago we gave up completely trying to keep the dogs off the couch, so there's dog and cat hair everywhere. The hair is only part of the problem. Our backyard has grass except for over by the fence where Lucy has dug a trench running back and forth to bark at the neighbor dogs. When it rains this turns into a mud pit. Then Miss Lucy and sometimes Mel will show up at the door wearing a nice set of mud boots. I don't know if you've ever tried cleaning mud off of dog legs, but let me tell you it is a fiesta of fun. Aside from involving a bucket of soapy water (usually just wiping the mud off with a towel is ineffective), washcloths, towels, and enough cursing to embarrass a sailor, there's also the dog's total commitment to not cooperating. Mel is not as bad as Lucy - he will just sometimes wander away when I'm beckoning with a towel. Lu, however, will slowly pull away from you while you're holding her paw which is now slippery from the mud. She'll also flop over like a sack of potatoes when you're attempting to put her foot in the soapy water. Last time I gave up and tossed her in the bathtub for an informal leg bath. Bad idea: it took me an hour to clean the tub afterwards. 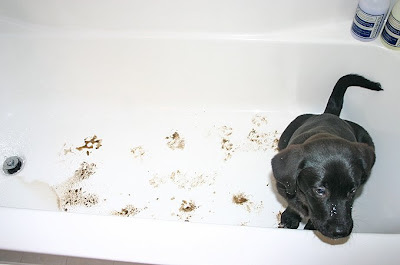 Needless to say, sometimes we don't get every ounce of mud off and they track it on the carpet. Their fur also collects dirt and that, too, is brought inside on a regular basis. Jeff the cat helps out upstairs by scattering his kitty litter all over the bathroom floor. There's nothing better than stepping out of the shower onto wet kitty litter. 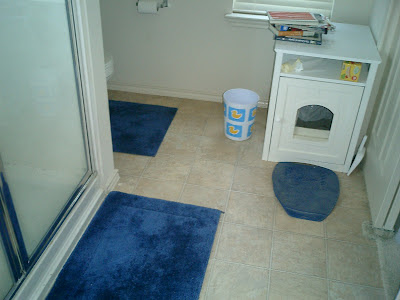 Kitty also eats in our bathtub. It's a little weird...ok a LOT weird, but it's the only place in the house we can keep his bowl of Cat Chow from being vacuumed by one of the dogs. 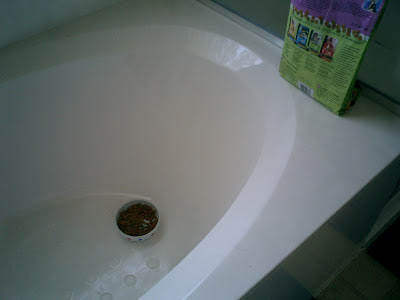 We do HAVE the capacity to keep the house clean as evidenced by our month long house sale in Arizona. Realtors arrived to show the house with minimal warning, so it had to be immaculate at all times. So I know it can be done! Maybe we should just pretend we are selling our house again.
pets tasks

Dug said…
I want to read an interview with the poor little guy who has to wear the Jeffrey costume, and also learn about his drinking problem.
July 25, 2008 at 9:23 PM