Disappointment, thy name is Cubs

October 05, 2008
The Chicago Cubs. It's been 63 years since they went to the World Series and 100 years exactly since they won. They've made a good run of it in recent years, though usually by looking promising in the first half of the season and flaming out like Snoopy's WWI Sopwith Camel as they neared the playoffs. The few times they have made it into the playoffs things didn't go so well. 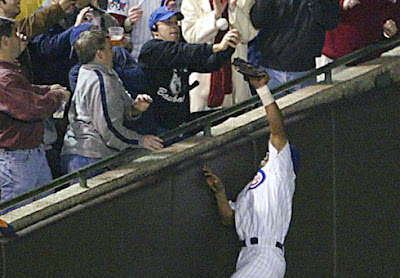 I think this poor schmo is now under federal protection

My heart goes out to my dad this morning. He was born and raised in northern Chicago and I don't know if the man has missed listening to or watching a Cubs game in his life. (That's a bit of an exaggeration, but you get the idea). Every year the beginning of the season brings a new wave of optimism for him, even though he's perfectly aware of the likelihood of self destruction. This year his hope was high, and with good reason. They started strong and finished strong, with the best record in the National League. Their 100 years of shame was finally behind them.

And then they started the playoffs.

Three games. Three games was all it took to crush the hopes of loyal Cubs fans everywhere.