Skip to main content
January 04, 2009
When I was a kid I was afraid of dogs. My only exposure to them included a yippy mutt who chased me on my way home from school every day, a friend's daschund who bit her dad's ear the first week they had it, and the menagerie of pooches housed down the street at the Kinslow's house I feared too much to get to know. (They were actually very nice dogs, I was just a wuss)

I was always a cat person and got my first cat when I was eight after months of helping Doug badger my parents for a kitten. Our second cat came along eight years later when my dad decided Moki needed a friend.

When Ryan and I moved into our first apartment post college we decided to adopt a kitten from the animal shelter. Ryan knew I was a cat lover and an apartment seemed better suited for cat than canine. Thus began the reign of Jeff the Cat.

Melbotis came into the picture 4 months after our wedding and a few weeks after moving to our first house on Briar street. By this time I was no longer afraid of dogs and liked them, but had not a clue how to care for one. He was huge, left carpets of hair in his wake, and needed constant attention. Mel and I got along fine - my answer to his neediness being to either play fetch, take him for a walk, or sit on the front porch while he sunned himself on his back in the yard.

These things seemed to make him happy, but there was something missing. I was not his favorite person. You knew you were Mel's friend when you entered the house and he presented you with a toy and happy squealing.

I never got the squealing.

In April 2002, I got a job in Tempe, AZ and moved to our new city a month ahead of Ryan, Mel, and Jeff. It was during this absence I realized how much I missed my fluffy orange friend. I came home for a weekend visit mid May and got my first ever squeally welcome from Mel. It warmed my heart.

Mel and I became good friends in Arizona. Ryan and I didn't make many people friends and had to rely on each other and our animals for entertainment and comforting. Mel stepped up to the plate. When I needed to get some air he was always up for walkies. When I needed to talk he always had intelligent, attentive eyes and two perky ears for listening. When I needed a hug he made the best teddy bear. And when I was sick he would stay close, not demanding, but placing himself so that his presence brought comfort. 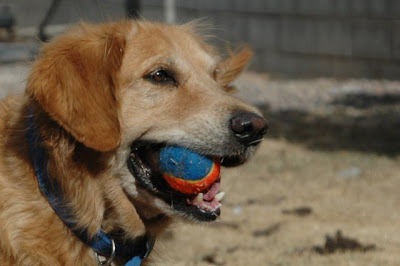 I love you so, so much, Melly. I hope you had a good life with us and are somewhere where the sun always shines and there are an infinite number of tennis balls to collect. Goodbye my friend, my good boy. 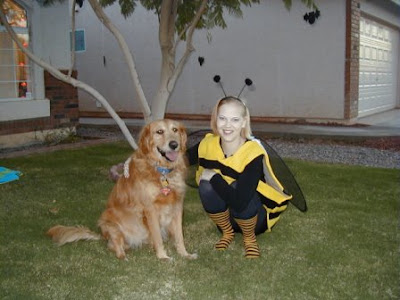 The League said…
That was a really fun Halloween.

I remember realizing that Jamie was now a dog person when she had some time off after Human Code shut its doors and I'd come home from work to hear about the day she and Mel had enjoyed.

By the time we were in Arizona, I was routinely having to ask "what about me?" when Mel would enter a room and head straight for Jamie. No amount of explaining to him that he was "my dog" helped.

As concerned as I was at first that Jamie and our new housemate would not click, I got to see them become terrific friends. And that was very much its own reward.
January 5, 2009 at 11:45 AM

Anonymous said…
Your statement about never knowing how you could love a dog resonates with me. I was never, never a dog person until I got to know Renata's puppy Zak, a little Jack Russel, who for no reason whatsover was nicknamed "Nutty Professor." He died of cancer in 2004, and I was really broken up about it. Zak could run like the wind, and we enjoyed racing each other.