June 30, 2009
After finally getting to bed at a decent hour for the first night in about a week, I woke up this morning around 5 with a migraine. Luckily I had the senses to bypass the pills and go straight for my Imitrex shot, which gets the drug in your system about 10 times faster and saves me from the 2 hours of flopping around in bed waiting for the medicine to kick in. The headache quickly subsided and I was back asleep within 10 minutes. The downside of the shot is, it's a bit powerful if I haven't taken one in a while, so I was a bit groggy when I woke up again at 7:30. It's honestly a miracle I made it out of bed at all what with the drowsiness and the soft rolling thunder outside and the comfiness of the bed.

I'd been shirking my Lucy walking duties for about a week for one reason or another, so we both were in desperate need of getting out to stretch our legs. Keeping a watchful eye on the encroaching clouds we headed out.

The walk was bizarre. It was incredibly warm but not hot, the sun was reflecting off of clouds in a way that looked like 8 in the evening rather than 8 in the morning, and the neighborhood peacock was crying his otherworldly peacock song. The clouds were moving in as if the Nothing was bearing down on Grand Oaks subdivision. 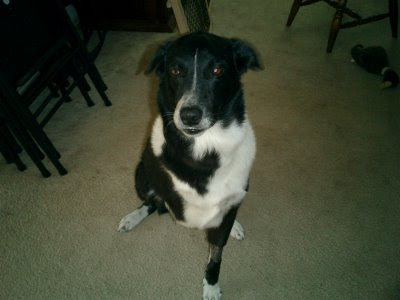 We cut the walk short when the thunder increased in frequency and the sun vanished. Alternating jogging and speed walking, we made it in the door just before the downpour.

So now I'm parked on the couch with a terrified Jeff the Cat on my lap and dogs camped out on either side of me. Every 30 seconds or so a clap of thunder rattles the animals (and me, too). Lucy whines for a good 10 seconds, Cassidy leans over to sniff Jeff, and Jeff makes his creepy gutteral, "Back off, bitches!" noise. I hope the rain stops soon as I'm in desperate need of running errands.
pets